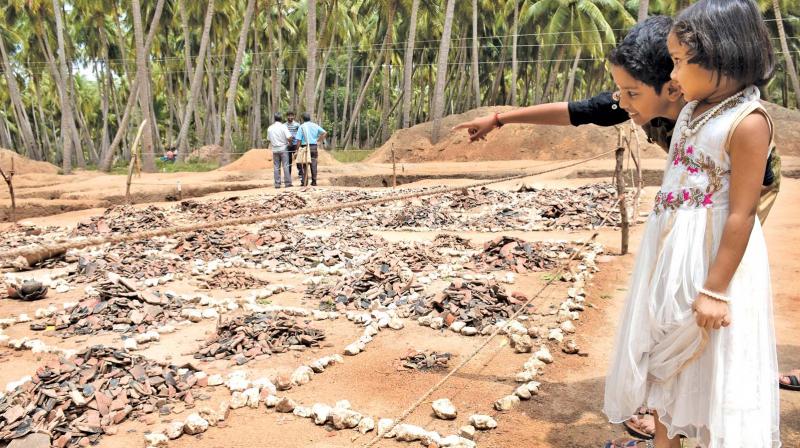 Students of Fatima College, Madurai are seen viewing the excavation site at Keezhadi near Sivaganga on Friday.

Sivaganga: The unearthing of thousands antiquities at Keezhadi in SIvaganga district pointing to an ancient civilisation that was thriving on the banks of River Vaigai are not likely to be shifted to Bengaluru as planned earlier.

Following the court orders staying the shifting of 5,300 antiquities at Bengaluru, the Sivaganga district collector S. Malarvizhi, who visited the excavation site on Friday, enquired of the officials of the Archaeological Survey of India (ASI) on what could be done to set up a site museum at the spot itself.

As news of the ASI planning to close the excavation site spread like wildfire, the site was crowded with college students, researchers and people from various places in Tamil Nadu. “We don’t want the antiquities unearthed from Keezhadi like shells, glass, beads, rusted old coins, weapons, pottery of various kinds and small tools made of bones and iron shifted to any other place. These are treasures of our Tamil culture past,” said S Dakshini Sri Ram from Manaparai in Tiruchy district.

Ram’s father G. Swamyzee, a homeopathic consultant, brought his family to the site after his friends informed him that the ASI would close it today. “I want my children to see the relics of the first river bed civilisation in Tamil Nadu, which is dated back to the 3rd century BCE,” said Swamyzee pointing out to the dozens of square trenches dug up at the sites.

Taking a close look inside the trenches, which are neatly dig out as square pits, would take one into pre-historic times. Layers of brick structures, wells, storages, drainage lines and mud vaults are an indication that the city unearthed belongs to the Sangam Age. “Seven furnaces found in the site indicate the settlers had involved in industrial activities in a textile unit. And they also had trade links with the Romans, which can be ascertained from roulette ware unearthed here,” explained N.K. Swain, Deputy Superin-tendent Archaeologist.

The artefacts like punch-mark coins found in the site also show they had trade contact with people from the northern parts of the country. “Jewellery, fine gem stones, semiprecious stones and a dozen Tamil Brahmi inscriptions found on pottery are all names of individuals like Udhiran,” said the archaeologist.

“In many artefacts we have found fish symbols, which may be an indication of it being an early Pandiya kings’ settlement before they shifted to present Madurai,” Swain told the collector.

An ASI team led by K Amarnath Ramakrishna, the superintending archaeologist, had identified nearly 293 San-gam Age towns along the course of River Vaigai ever since February last year when the ASI started excavating after getting permission from the land owner. “We confined the excavation to a limited area because other lands are under cultivation,” he said.

Retired schoolteacher Balasubramaniam, who was the first person to identify the artefacts in the 1970s told the collector that the government should allocate two acres for setting up the site museum.

A.Krishnan, who permitted the ASI to conduct the excavation in his land, expressed his willingness to give his land for setting up the site museum provided the government pays him adequate compensation.”

The collector reacted positively stating that she would direct the revenue officials to survey the area to identify government land for this purpose. “You can also suggest suitable land to our officials,” she said. The district administration is also willing to help the ASI to extend the excavation in other areas provided they submit the proposal to them.

‘Journey of a Civilization: Indus to Vaigai’ review: The route from Harappa to Keezhadi

What Is The Controversy Around Keeladi Excavation In Tamil Nadu?

Powered by WordPress | Theme by The Bootstrap Themes